I was extremely excited to photograph Elizabeth and Mike’s wedding at Angel Orensanz. Elizabeth actually interviewed me in 2009 for the NY Magagine Wedding issue and was personally enquiring about my wedding packages a full year and a half before she actually got engaged! That is the type of enthusiasm I love :) When she came to the meeting, along with her delightful Mother, I knew right away that this was a perfect match.

I enjoy asking my brides to tell me in their own words the story of how they met their soulmate and I have attached below what Elizabeth kindly sent me. For me, it is never just a factual account of how a couple met – as nice as that is to document alongside the photos for others to read. Rather, the circumstances, the tone and the subtle details of their story always reveal something about their love and unique relationship. I do my best to get to know my couples before a wedding as that inevitably inspires me to photograph them. However, on the wedding day itself, I am drawn into their lives, their families, their relationship, their locked eyes, and cannot help but feel very emotionally connected. Later, it is a time to reflect as I edit the photos, and in essence, truly relive the moments of their wedding day. When I read their story, it sort of feels like reading a beloved novel for the second time when one is freed from having to focus on plot but can now enjoy all the subtleties of the characters and the beauty of the prose. And so, I see more clearly now things I only had time to sense in the flash of the wedding day itself. While Mike projeted this aura of old world respect, I can now appreciate that even better in how he first asked Elizabeth’s parents for her hand in marriage. I also adore how their love is so natural- that while nurtured by patience, it was seemingly inevitable. Perhaps what strikes me most, is how simple and pure Elizabeth and Mike both are- that their very quiet personal proposal did not require the artifice of strangers or heavily orchestrated surprises- just a bottle of sparkling wine and a yes.

Here is their story:

Mike and I met at work in 2007, at a restaurant in Boston where he was the sous chef and I was waitressing while getting my Master’s in teaching. We started off as friends, and ended up dating about two years after we met. When we began our relationship, Mike had already decided he was moving to Seattle about six months later, but I was convinced he would change his mind! Sadly, Mike followed through on his plan to move across the country in August, 2010. Even though we both agreed to move on, we spoke on the phone several times a day after he left. Against all of my friends’ advice, I went to visit Mike in Seattle in the fall. It was an absolutely perfect week filled with fun dates, cooking and snuggling :) Seeing me made Mike realize how much he wanted to be with me, and how happy we were. We felt so at peace being together again; it was so natural and we were giddy the whole time. About a month after my trip, Mike decided to return to Boston because we both clearly wanted to be together. I was so happy that I never asked him not to move, or to come back — of course I was hoping he would come back but I wanted him to make the decision on his own. After six months in Seattle, Mike flew home during a brutal snowstorm in February, and I picked him up at the airport. Not even the flat tire we got later that evening could tarnish our reunion :)

Mike proposed 8 months later on October 27, 2011. We had talked about our future and he had no doubt I would say yes, but he was still so nervous. I later found out that he had the ring (which was a family heirloom, given to him by my parents after he told them he was planning on asking me to marry him) for over a month, hidden in his guitar case. He was waiting for the perfect moment. He had many ideas planned for a creative proposal, but they kept falling through! At the end of October, we went to Amherst, MA, for a couple of days to visit Mike’s alma mater (Hampshire College) and he had a plan to propose at his favorite secluded spot on campus surrounded by beautiful autumn trees. Of course, it poured the entire time we were there. By the time we got home, I was feeling cranky after being stuck in traffic in the rain, and Mike was so anxious about the weather not cooperating with his plan. He told me later that the ring had been “burning a hole in his suitcase”, but he felt the time wasn’t right. When we got home, I went to take a nap and Mike sat out on our porch for over an hour, trying to work up the courage to pop the question. When I woke up, Mike was sitting on the bed. He held the ring out to me but didn’t say anything! Finally, I prompted him — “you have to ask me a question!” He said, “Do you want to get married?” and I burst into tears. It was so overwhelming and perfect — we were both happy in the end to be alone, in our home, without anyone else watching us. It felt so personal and I would not have wanted to be anywhere in public. To celebrate, we ordered sushi and shared a bottle of prosecco as we called our families to share the news :)

We started planning the wedding pretty quickly after that. I was starting my first year of teaching in September 2012, so we knew we wanted to get married before that. My mom suggested Angel Orensanz as a venue, so we went to see it two weeks after we got engaged, on my birthday. We both knew it was a perfect fit. Mike studied playwriting in college and has always been very drawn to dark, theatrical spaces, so he loved it, and I liked that it had a historical, Jewish feel without being solely a Jewish space (since Mike isn’t Jewish). After that, everything else fell into place. I fell in love with the fourth wedding gown I tried on. I had a very different idea about what I wanted, but when I put on my dress, I immediately knew it was the one. It had an old-school, vintage feel to me — I liked that it was modest with my entire back covered, and simple but glamorous. We met with one florist, one DJ, one photographer (!), one rabbi — we both knew what we were looking for and felt like we were extremely lucky to meet such wonderful people so early in the planning process. Six months before the wedding, nearly everything was done. My mother also was a tremendous help. She did so much work to help us find the vendors, and everyone she recommended ended up working out. We have very similar taste and styles, so we didn’t have very much conflict. Honestly, it was much smoother than I anticipated! With regards to theme, we didn’t really have one. The words we used to describe our dream wedding were romantic (which is why we chose more candles than flowers for the centerpieces, we hoped for very soft, romantic lighting), classic and timeless, and we feel like we got what we wanted. I chose black instead of a brighter color because I love black :) My bridesmaids loved their dresses and that was important to me. Also, because of the gorgeous lighting options at Orensanz, I didn’t want there to be too many other colors that would take away from the space and potentially clash. For Mike’s boutonniere, as a surprise, I asked the florist to include thyme, which is his favorite herb. For my bouquet, she added lavender, which is one of my favorite scents. We tried to add as many personal touches as we could, like naming the tables after West Wing episodes, which is our favorite show and something that we bonded over in the early stages of our relationship. We also added the candy truck at the end because I love candy, and Mike eats Reese’s peanut butter cups (which was our wedding favor) daily. The biggest part of our wedding that meant a tremendous deal to me was that Mike was not only willing, but happy, to include all the Jewish elements that were so important to me and my family. After he learned all the reasons behind everything (like my circling him 7 times, and the breaking of the glass), he felt very connected to it. The picture of him with his foot raised to break the glass truly means the world to me…it is tangible proof of how much he loves and respects my heritage. That’s pretty much it!

To view a few of the layouts from Elizabeth and Michael’s album design, click here: A Sample of Elizabeth & Michael’s Album Design 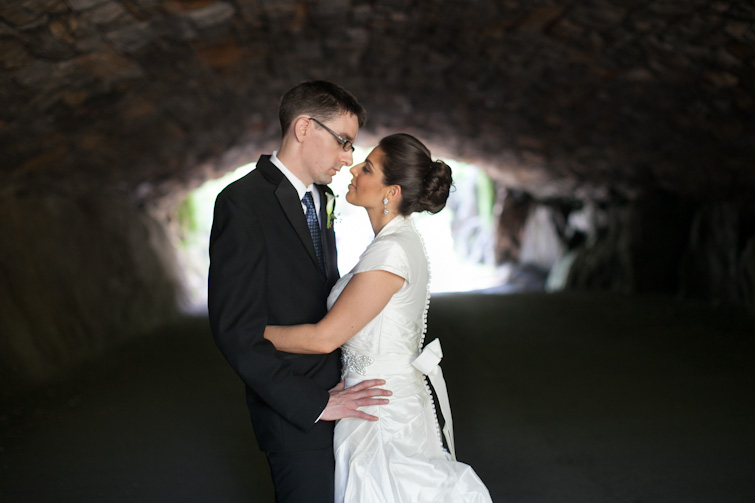 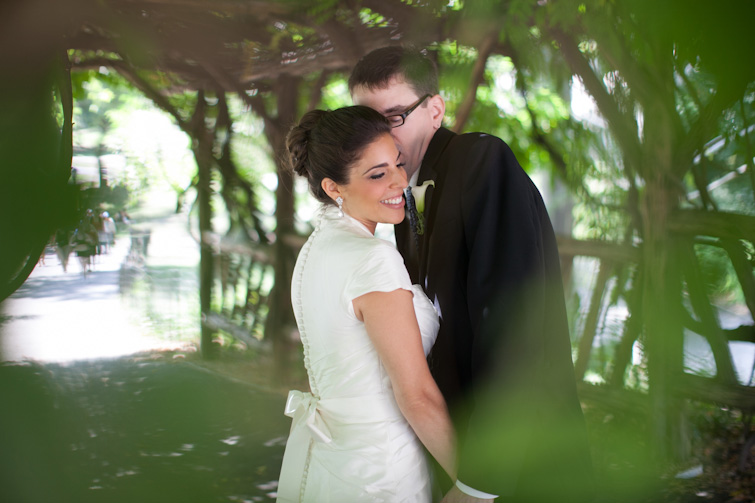 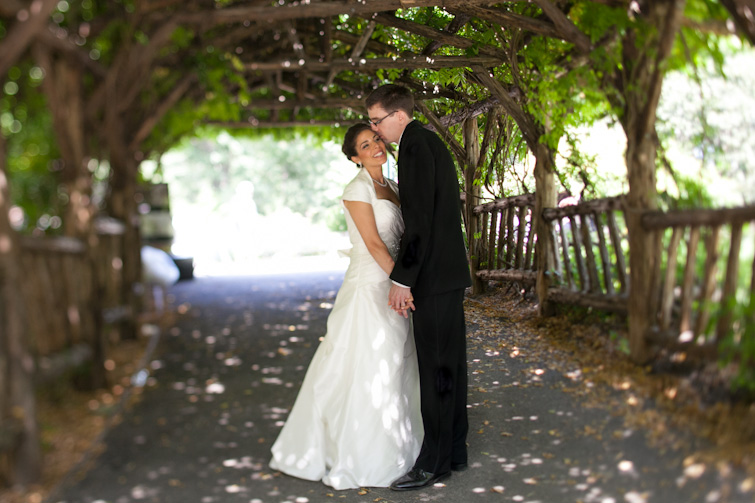